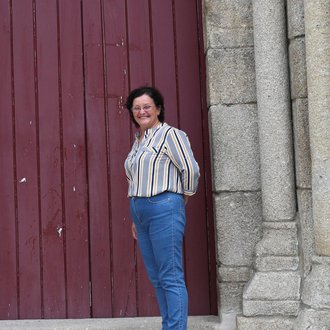 Since she was 14 years old, Mrs. Lurdes has been taking care of her Church of Tarouquela. In addition, she has been active in the parish: carer of the altar of Our Lady of Fatima, catechist, reader, extraordinary minister of the holy communion, singer in the choir, and assistant to the parish priest.
Her wedding and the christening of her children were the best moments experienced in this Church.
She tells us that she 'heard, in the old days, that the church had been built in one night, but surely that is a legend, ... they also talked about a man who came to visit a nun and, later, was found dead, ... they said it was a wolf that ate him, that only his feet inside his boots were left!.'
She says that the Church receives many visitors, including many foreigners, especially since it joined the Route of the Romanesque. The corbel of the 'exhibitionist' is the most appreciated feature."