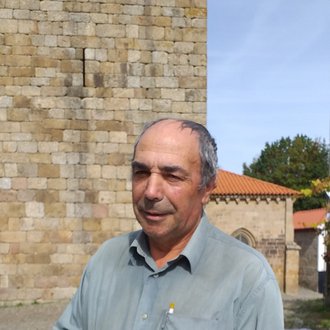 Mr. Joaquim has been opening the door of Cárquere Monastery to visitors and pilgrims since the early 1990s.
He says that it is a very important monument for the entire parish and that the fact that it joined the Route of the Romanesque was very positive: 'it was the best thing that could have happened (...) there is more liveliness, more tourists.'
He usually tells the legend of King Afonso Henriques and the legend of the lizard to those who look for him in the Monastery: 'Egas Moniz, King Afonso Henriques' tutor, (...) had to place the child on top of the altar and light a candle. They had to spend the night there in a vigil. They fell asleep and, when they woke up, they found the boy already standing, and then there was a miracle [the cure of the king's legs].'